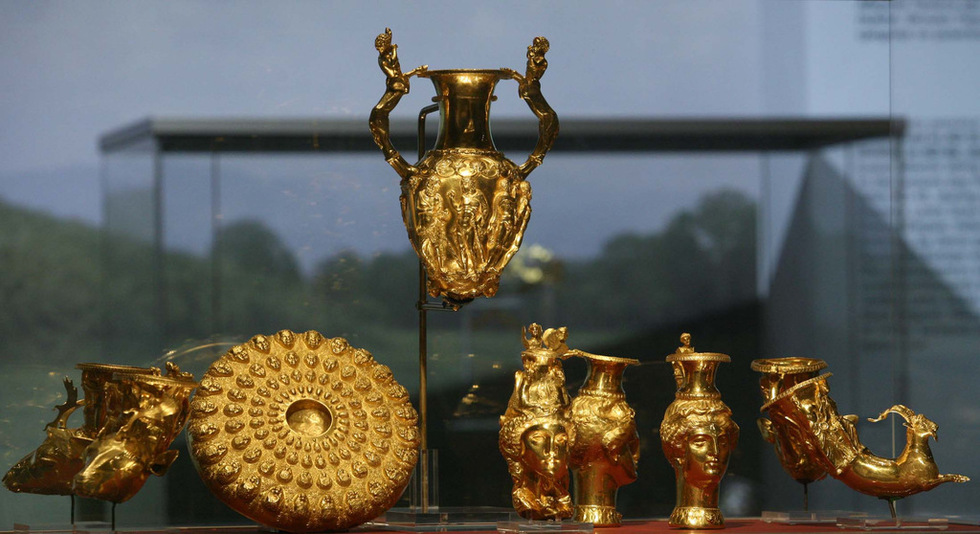 The Panaguriste golden treasure is ancient Thracian golden set for drinking, consisting of nine golden vessels with total weight of 6,164 kg and was excavated on 8th December 1949 in the area of Town of Panaguriste in “Merul” area by the three brothers Pavel, Mihail and Petko Deikovi – masons.

It belonged to unknown ruler of the Odrisi tribe form the end of IV and beginning of III century B.C.
It comprises of 9 golden objects, with total weight of 6,164 kg: One phiale and eight rhytons. Such vessels from precious metal are symbols of social status and are used in ritual activities of Thracian princes. The representation of gods and heroes, heads of Negroid features, sacred animals and mythological creatures in ancient times had ritual function – they must purify the liquid and protect the participants of the ritual. 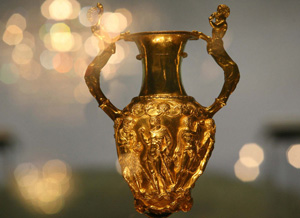 Egg-shape body, no stand/leg. Wide figurative frieze. In the center – two-leave door, flanked by Ionian columns with lion heads as capitels and wing sphinxes in their base. Around – 7 male figures. On the right hand sight a man with a beard, wrapped in long cloth and resting on a staff. He is making a prophesy using a liver of a sacrificial animal. The rest of the men are soldiers, naked below the mantles and armed with swords. One of them has a small beard, staff in his arm and high shoed and looks at the oracle. Another one, with a horn, signals for a attack on the door. Between the closing doors are seen heads and the hands of a hiding old man. The frieze is separated by the egg-shape bottom with pelmet line. Under the handles there are two Negroid heads with open months, like spouts. On the one side, one old man carries kantharos. Next to him is Hercules, winding the snakes. The center is filled with five-leaf rosette. The handles are with the form of standing, shooting centauries. Their hind legs go in channeled handles and their front legs are touching the amphora. Two letters are engraved in the inner part.
Phiale, gold, height 3 cm, diameter 25 cm, weight 845 g.

Around the semi-spherical umbo (protruding central part) – rim of small rosettes; wreath of 34 acorns; three friezes with enlarging African heads – 72 in total. The value of the phiale is engraved in its neck – 200 straters ½ drachmas and one obol, according to the monetary system of the town of Lapseki (located at the Asian bank of the Dardanelles). The gold of the phiale is different in composition from the gold, used for the rhytons.
Rhytone with the shape of goat body, gold, height 14 cm, diameter 9 cm 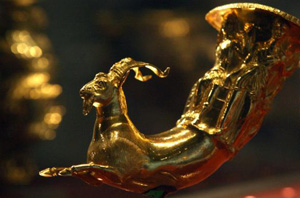 Widening month with protruding edge, decorated with frieze of arcons. Lower – figurative frieze: Hera sitting on a throne and holding in her right hand phuale and in her left, the end of a mantle, going over her head. On her left and right hand side – Artenus and Apollo with a bow in his hand. Behind them – Nike with open wings. The name of the gods are engraved by their heads. The lower part goes in a goat body with curved horns. The eyes are plastically modeled. The opening is between the protruding legs of the animal.
Rhytone with a hear of a deer, gold, height 13.5 cm, diameter 8.8 cm, weight 64,8 g.

Handle – lion with his paws over the opening; in the base – woman’s head. The horn is shortened and entirely covered by embossed figural image. Sitting Paris in Phrygian clothing, holding a shepherd’s staff in his left hand. His right hand is raised to show, that he has made his choice which of the three goddesses is the most beautiful. They are around him: Next to him, on a throne, sits Hera, in the left sits Athens with a sword and a helm. On the other side – Aphrodite with a shining face, because she won the competition, and she covers her mantle with her hand. Paris is named with his original name – Alexander. The names of the goddesses are also
Rhytone with a hear of a deer, gold, height 12.5 cm, diameter 8.8 cm, weight 689 g.
Frieze – two symmetrically located mythological scenes: Theseus fighting the Cretan bull in the Marathonian field and Heracles with the cow of Kyrenia
Rhytone with a head of a goat, gold, height 12.5 cm, diameter 8.5 cm, weight 505.05 g. 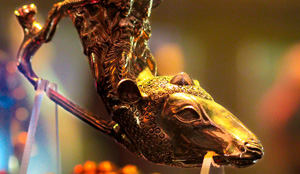 It finishes with semi figure of a goat. The fur consists of dense row of engraved, concentric circles. On the frieze over the horn can be seen sitting Dionysus with a scepter in his hand. Next to him sits the nymph Eriope. The two names are engraved. On both sites – dancing maenads with trumpets and thyrsuses.
Anthropomorphic jug, gold, height 20.5 cm, width 12.1 cm, max. diameter 8.36 cm, weight 387.5 g. 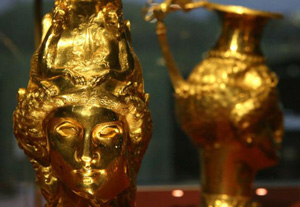 Narrow mount, bent outwards. Short neck, connecting to the upper part of a helm. The vessel is formed by woman’s head with helm. The helm is decorated with two kneeled griffins. Between them – engraved palmetto. The prolonged face has correct lines. The curly hair comes out of the helm and goes over the neck, that was damaged during excavation. In the start of the neck – lion’s head. The handle is in the form of channeled column on the top of which sits a sphinx with open wings. Its front paws are over the edge of the month. The body of the sphinx is decorated with palmetto.
Anthropomorphic jug-rhyton, gold, height 21.5 cm, max. diameter 10.5, weight 460.75 g.
Widening opening, bended outwards, around the neck – embossed egg-shape frieze. The body is in the form of woman head. The hair is covered with veil, kept on the forehead by a hair-clasp.
Anthropomorphic jug-rhyton, gold, height 22.5, width 13.5, max. diameter 10.3, weight 466.75 g.
As with other jugs, incrustation of the eyes is not preserved. During the excavation, the wings of the sphinx are broken. Small differences give individualities to the three women’s heads. The helm relates the woman’s head with Athens, the other two can be compared to Hera and Aphrodite, judging from the rhytone with Paris decision. 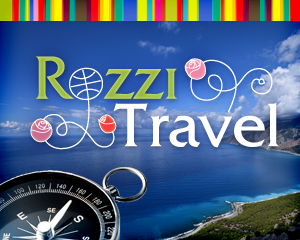